Your Hard Drive, Your Friend

The hard drive has been through many changes over time.  The earliest ones being the size of a small apartment.  Today’s computers store data on hard drives as small as a three or four credit cards stacked on one another, with a storage capacity that was unheard of even 15 years ago.  To give you an example, the Apollo 11 “hard drive” (it wasn’t really a drive that we would know today, it was more of a hard wired information storage system,) had a whopping 74 kilobytes of storage capacity (about 74,000 bytes, an information size system,)  Today’s home computers can hold up to 4 Terabytes of information.  Thats roughly 4 BILLION times more information, and the number keeps climbing.

Lets take a look at a picture: 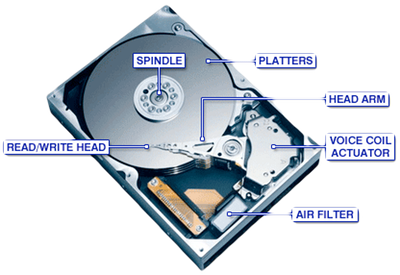 First, note the spindle, platters, head arm and read/write head.  This is the piece that the platters spin on.  Anyone over the age of 30 should recognize that looks an awful lot like a record player.  The platters hold the information on the hard drive.  This information is put on there, and read magnetically by the read/write head.  There are a few key differences between a good old turntable and our hard drive though.  The first and most important difference is, that while both of them spin, the fastest a record player will spin is 72 rpm for an LP.  A decent hard drive will spin a hundred times faster, at around 7,200 rpm.  That is a huge jump!  Because a HDD spins so fast, the information is able to be transferred more quickly.  However, this also means that movement, just like scratching a record, can damage your HDD.  A good rule to follow, is while your computer is running, NEVER MOVE IT.  It may not get damaged on the first time, but if you move it on a regular basis, it will, eventually cause your hard drive to fail.  This brings us to another point.

Hard drives fail.  It is never a matter of if a HDD is going to fail, but always a matter of when.  This is why you may see a difference in price when looking at storage for your computers.  The best way to protect yourself is to back up your computer on a regular basis.

Backing up a computer can be a simple process, depending on what kind of computer you own.  Apple computers have a program built in called Time Machine™.

Starting with Windows 7, Microsoft includes software to back up your computer to an external hard drive.

Apple to customers who have had their phone repaired: “Enjoy Your Brick.”
February 5, 2016